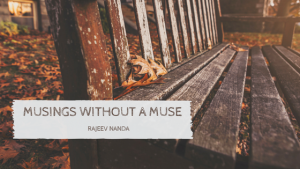 Decades ago, when I wrote an article with the same title for a (now defunct) e-zine, my focus was the immaturity and gullibility of Indian society; especially the youth. Growing up, I would see mobs of youth going on rampage at slightest provocation by religion, politics, social causes they believed in or to protest against the ones they did not. They would hurt and, sometimes kill others, damage public and private property, disrupt civic life that led to economic loses of significant amounts. I used the phrase our enemy’s best friend to posit that when we act in such a way, we are in fact inflicting wounds on ourselves that our enemy wished they could!

Over the decades as my worldview expanded, I have concluded that the same holds true for the human species. Homo sapiens appear to be the only species on this earth that wages wars, instigate hatred, ravage natural resources of other countries and plunder the very environment we live in; not because of need but because of the insatiable greed to grab more.

Other species only kill when hungry or when threatened. We do it for all the other reasons.