Smugly, the rock said, “Look at me. I can bend the river around me”.

The twig, resting in the embrace of blades of grass, responded, “I think you resist the flow”. 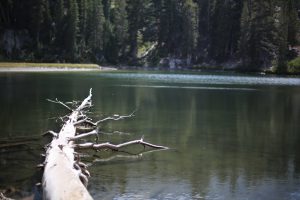 “The flow is dangerous! It poses risks…”, after a moment of pause the rock said, “… sometimes fatal”.

The twig thought for a moment, as if trying to understand the rock’s perspective. “…but, the river and its flow will take us to the ocean“, its voice had a touch of exhilaration.

“Not always. I’ve heard many stories. Sometimes it ends up in a pond, not going anywhere. A lot of times it runs out of energy and withers into a creek or a trickle”, the rock countered. “I think the flow, the river and the ocean are overrated. What good is a journey if you do not know its destination”?

Before the twig could respond, the rock said, “Tell me your story. Where do you come from? Were you what you are now or has this flow changed you? What brings you here …. Well, the last one was a rhetorical question”, the rock chuckled at his own joke.

The grass blades squeezed the twig in their embrace. The flow of the river grew silent, as if to listen to what the twig would say.

“I once was a mighty branch of a big tree”, said the twig in a reflective voice. Most of the river had flowed but handful of it remained swirling between the rock and the grass as if to listen the story. The rock seemed to shift closer to pay attention.

“My parent was at the bank of a majestic river. I and my sisters loved the seasonal changes. The river would swell during the summer, ebb in the winter and sometimes freeze over. We loved flowering and shedding of our leaves. Each change brought an excitement that…”, after a moment of reflection it said, “… lost its charm on me the day I noticed a big branch flowing merrily with the river”.

“Ah! The same old story of seduction by a traveler’s tales”, the rock passed a judgement.

“Not exactly”, said the twig without losing its cool. “The branch was oblivious to the fact that I noticed it. I thought – how lucky is this branch to experience the flow of the river. I wonder where it leads to. My sisters had a different reaction though. They were sorry to see the branch being separated from its parent and sisters. They saw in it a child separated from its parent, a sibling adrift alone. They wondered – how scared this branch would be without none of its family around. They all thought I had gone crazy”.

“I think the same when I see these small little pebbles rolling with the river. A mighty rock. All shattered and broken away from its family and its roots”. The rock sympathized.

“Family is supposed to be your strength, not your weakness”, the twig said tersely. It continued after regaining composure, “The vision of the branch floating with the river stuck in my head. Every time the river rose, I dreamt of somehow dislodging myself and going with the flow. I wanted to be free”.

“Were you in bondage”, the rock asked? “Was something holding you against your will”?

“Then why do you say you wanted to be free”?

“I wanted to get away from the static life. A life that gets so predictable that you can see how each day will begin and how it’ll end. Day on day, year on year”.

“What’s wrong with that”, the rock asked? “Why is adventure glorified over stability? I love predictability. I can plan around it”.

“So, you mentioned you were once a mighty branch”, the river asked. “What happened”?

The twig continued, “One of the summers the river swelled so high that most of the trees on its bank were submerged into its waters. The water level reached me. I do not know what hit me but in a flash, I noticed myself floating in the waters”.

“Yes, life always changes in a flash”, the rock added. “It must be a scary moment for you”.

“It was a heady cocktail of emotions. Exhilaration combined with sadness and fear. I was sad that I did not even get to say goodbyes to my family. The fear of the unknown enveloped me; but the exhilaration of the freedom and going with the flow overwhelmed it all”.

“But, you don’t look like a mighty branch to me”, one of the blades of grass mentioned.

“Not anymore. The first fall from the cliff was deadly and crushed me to pieces”. The twig said as a matter-of-factly.

“See? This river may appear innocent and calm; but it is ferocious. The flow turns deadly all of a sudden”, the rock said in a I-told-you-so tone. “It crushes you all right”.

“Yes”, the twig responded. “The first thing that got crushed was the ego. I realized how fragile and insignificant I was. But, then a sense of serenity enveloped me. I suddenly felt alive”.

“It was as if a sudden burden was lifted. The expectations to be a mighty branch. To live life as all other branches live. The burden of expectations from everything and everyone around me. Heck, I even gave up the expectation that the river will take me anywhere”, the twig said it all in a single breadth.

“I hear you”, the rock responded. “You’re not the first one I am talking to. Many mighty branches, with their egos intact, have also traversed this path. Most of the twigs I’ve talked to either continue to live in their glorious past or continue to lick their bruised egos. Worse still, a lot of them regret the desire to flow with the river. But, your perspective is different…. kind of refreshing, if I dare say”.

The twig smiled at the back handed compliment. “Each to his own. I cannot judge the others as I have not traversed their path”.

They fell silent. The flow of the river grew stronger. The twig felt rested and ready to move on.

“The river’s current is growing stronger. It’s time for me to go”, the twig broke the silence. It tugged a little at the blades of grass who loosened their grip. The swirling river lifted it to join the flow. “Thank you, friends, for sharing these moments”.

The grass blades and the rock smiled back and then looked at each other with the question that never gets asked.