In one of my earlier posts, Yearning, I mentioned that sometimes it’s not the  words that claw at your heart but a picture that seizes your ga 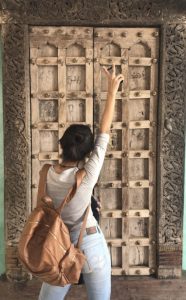 ze. It then sprouts words that come together to form a prose or a poem. When my nephew, Siddharth, posted this picture on Facebook I felt this compulsion to write. So, here it goes…

The walls have ears, they say. They forgot to mention that the doors have eyes. And. Am I glad that I see what you cannot see. The expression on her face is to die for. Not that I’m not dead, after all doors are made of dead wood, but you get my drift. How she’s grown… from a cranky little toddler to a young woman who is ready to take on this world.

The best thing about being a door is that it gives you a unique vantage point over generations. Even if the owner redesigns or rebuilds the house, the door usually stays where it got put when the house was originally built. I remember waking up to her crying at night when she was brought home from the hospital. Man… was she a howler! I would be enjoying the peace and quiet of night when all of a sudden… whaaawnnn… whaaaawnnn… would jolt me and the dogs in the street out of our slumber. The dogs would go silent but she would be relentless till one of parents would attend to her needs. Of which, there were only three – feed me, clean me, entertain me.

My heart would melt when her mother or father would take her in arms and pace around this room in the middle of the night. Sleep and tired from their day job they would be half asleep but would pace back and forth till she would get bored and go back to sleep. But while she was awake, she would chuckle and giggle and her big eyes would try to catch anyone’s attention; including mine. How I loved to watch her smile. It would be like the Sun basking the world in its warmth.

She learnt to walk ahead of her time. She would run around messing everything up. The only way to make the house child-proof was to remove everything from the room that was within two and a half feet from the ground level. She alone was enough to tire her parents, the grand-parents and the maid by early evening and still have enough energy left to want to go out and play.

My most precious memories of her were when, in the afternoon, everyone would go to their rooms for siesta and she was left alone to entertain herself. She would sit in my lap, I mean on the threshold, and lean against me to read or listen to music or just play silly games. I wish I had arms to play with her or to give her a tight hug and comfort her.

The first word she learnt was ‘NO’ and the second was ‘WHY’. There was hardly a sentence she spoke that did not have one of these words or both. A rebel from the start, she would question everything… and I mean everything! After a while, the world gave up. Her reasoning was impeccable and her decisions, once made, were immovable. She was a rock and it was the rest of the world that had to adjust accordingly.

I wish I had the power to stay shut and not open today. She’s leaving on the next leg of life’s journey. The bag is full of her stuff for the journey to far away lands, the mind is full of her plans to take over the world and the heart is full of palpitations. The expression, a riot of all emotions mixed together…

She’ll be back, hopefully  soon. With her stories. Of success, failure, heartbreaks, love affairs, disappointments and all the emotional roller coaster ride that life takes you through.