More than the letter mentioned in the FB post, I found this picture (credit: unknown) very captivating. Sometimes it’s not the  words that claw at your heart but a picture that seizes your gaze. It then sprouts words that come together to form a prose or a poem. T 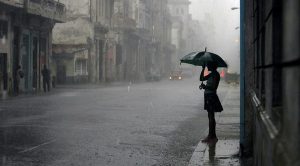 hen, there are times when a picture will leave you yearning to get inside it and talk to the people in it. The reality may be as boring as someone waiting to cross the road; but then, I am often told that I live in my own little world of imagination 🙂

If I recollect correctly, the FB post was about a man who met a woman in a bar and they had a-night-to-remember experience. He wrote her a letter that she received after 17 years of that meeting. The FB post shared that letter.

Here’s my take on it.

It was the fourth time she had borrowed the bar man’s umbrella to step out and look for him. The rain was unexpected at this time of the year. This time she saw a man standing across the street. Her heart skipped a beat. The hope faded when she saw him flick a cigarette butt and go back inside the building. She caressed the letter in her skirt pocket, sighed and then went inside.

The martini was untouched as if waiting for someone to raise a toast. She handed back the wet umbrella as she sat back on her seat. The bar man nodded and set it under the counter. The bar was sparingly occupied but the bar man kept himself busy with wiping the counter or glasses waiting for someone to place an order or engage him in a conversation.

She raised a silent toast and sipped her martini.

“He stood you up?” the bar man asked as he wiped a droplet of water that had dripped from her cold glass.

Tears welled up in her eyes and her voice choked, “No, I did. For fucking seventeen years”. She was angry at herself. She pulled out the letter and placed it in front of him. He hesitated, but when she nodded approval he took and read it.

“When did he hand you this letter?” she asked when he handed it back. She noticed that his eyes had turned misty but he hid it well.

He poured himself a glass of water and sipped it before answering. “He was a regular customer. So regular that I could set my watch against his arrival. As far as I can remember, or seventeen years as per the letter, he would step in at 7:30 PM every Friday and sit at the bar stool where you are seated. He always placed the order – a double whisky for me and a gin martini for the lady”.

A shiver ran up her body.

“He would order two drinks. One for himself and one for you, now that I know. He would say, ‘Billy, she will come one day. I can promise you that’. Then he would recount the night you met. Over the years a lot of imagination had seeped into the facts but the main story remained intact”.

A tear ran down her cheek and mixed with her martini as she raised the glass to hide behind it and get a sip to calm her nerves.

Billy continued, “I have lived that night through him all these years and that’s how I could recognize you even after these many years. He would take his time to describe your every feature as if someone was talking about the most exquisite sculpture or a painting. How you both instantly connected even though he was double your age; your laughing at his jokes and sharing your own; the philosophical topics you discussed on life and relationships”.

He stopped as he noticed the dams break loose from her eyes. She was sobbing and gulping her drink at the same time. He fetched her some napkins and a glass of water and moved to the other corner to leave her alone for a while.

He noticed how beautiful she was even after all these years and concluded that younger her would have been devastating to all the men. He sneaked glances at her but kept himself busy walking up to the occupied tables and watching the pouring rain outside. It was starting to turn dark.

She had composed herself or maybe the martini did it. She kept fiddling with the straw in the glass of water lost in her thoughts. Frequently a smile would radiate her face as she recalled that night or blood rushed to her face for the same reason.

A while later she raised her glass to signal him a refill. He walked up to him and asked, “Repeat?”

“A martini for me and a double whisky for the gentleman”, she said smiling.

One thought on “Is that he?”